In 2021, ICOS-Spain started the incorporation of El Arenosillo Atmospheric station to its national network and its offical entry into the European infraestructure ICOS (Integrated Carbon Observatory System) was on 1 January 2022. ICOS aims to characterize and quantify the sources and sinks of carbom in Europe, as well as to acquire a better understanding of the processes of carbon exchange between the atmosphere and the biosphere. All this information will help to predict and mitigate the effects of climate change.

El Arenosillo atmospheric station manegeg by the National Institute of Aerospace Technology (INTA) is located on the south coast of Spain near the Doñana National Park. This station consists of an instrument tower with wind sensor and air intake located at different heights of 10, 50 and 100 meters and with the instrumentation to measure trace gases (CO2, CO and CH4) located at its bade. In addition, El Arenosillo is the first ICOS-Spain station located in the Spanish peninsula, since the atmospheric station of Izaña is in Tenerife (Canary Islands) and the Oceanic station CanOA VOS is installed in a commercial vessel with a weekly transect between the ports of Barcelona and Las Palmas de Gran Canaria.

In the future, the data provided by El Arenosillo will help researchers to better characterize the transport of air masses from the Atlantic Ocean and the Mediterranean Sea to the interior of the Spanish peninsula and vice versa. 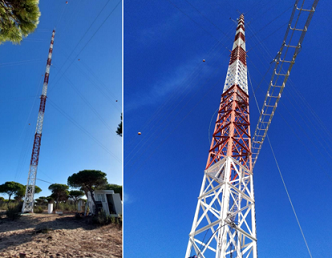